Artworks for Jellyfish and Other Others

After humans destroy one another's worlds, what will be left are the jellyfish. At least, this is the suggestion of the biologist Jeremy Jackson, who argues that the synergistic effects of the 6th mass extinction have led to the flourishing of some species – such as jellyfish. Such thriving is almost certainly not what Joseph Beuys had in mind when he argued that we are creating the "total artwork of the future social order." But what would happen if we held these provocations together: that human auto-destruction is a creation for other worlds, other species ... other others? Artworks for Jellyfish collects writings from artists, theorists and scholars of science on the question of how art mediates and mitigates our imagination of the future in the wake of an extinction event - or, to put it a little bit differently, how to make artworks for jellyfish.

A mattress, conceived as a place to crash, together. A hot tub, imagined as a site to encounter the end of the world. In times of networked connectivity what's perhaps more radical than embracing virtuality is to think about the stakes of the body, community, and personal encounter. These are themes engaged by the work of performance artist Cindy Baker, whose projects speculate on the forms of intimacy and interaction that art is capable of generating. In Baker's words, her art uses the medium of "context" in order to explore questions of community engagement and social inquiry. Brought together by Baker as catalyst, the contributors to this volume share a spirit of creative community and the belief in context as an important element of transformative social practice.

In the 21st century, a humanly-impacted climate is the natural state of planetary affairs: a global environmental disaster but perhaps also an artwork of geological scale. Responding to this idea requires an artistic spirit with an ecological conscience--perfectly espoused by the work of artist Jennifer Willet. From speculations on the genetic future to reflections on the ways that art challenges engagement, interaction and analysis, the contributions in this book share a key concern of Willet's: a recognition of the complexities of artistic engagement in a time when the stakes of technological living have never been higher. 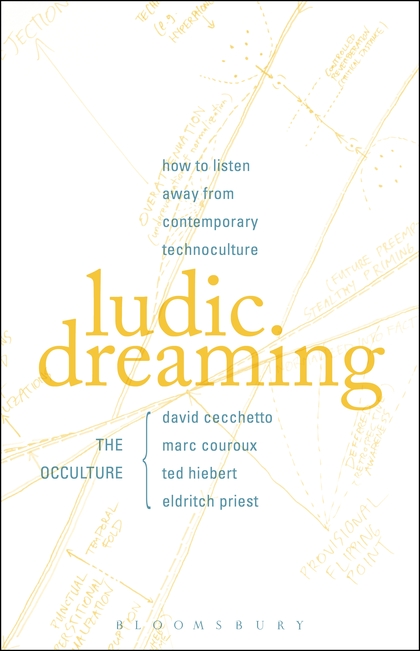 Ludic Dreaming uses (sometimes fictional) dreams as a method for examining sound and contemporary technoculture's esoteric exchanges, refusing both the strictures of visually dominated logic and the celebratory tone that so often characterizes the “sonic turn.” Instead, through a series of eight quasi-analytical essays on the condition of listening, the book forwards a robust engagement with sounds (human and nonhuman alike) that leverages particularity in its full, radical singularity: what is a dream, after all, if not an incipient physics that isn't held to the scientific demand for repeatability? Thus, these studies declare their challenge to the conventions of argumentation and situate themselves at a threshold between theory and fiction, one that encourages reader and writer alike to make lateral connections between otherwise wildly incongruent subjects and states of affairs.

Our earth is no longer the solitary blue marble pictured from outer space by the Apollo 17 crew in 1972. Now, scholars such as Amanda Boetzkes imagine it as a plastic blue marble, mediated as it is through the paradoxes of intersectional and elemental thinking, anthropogenic change, and the ongoing project of imagining the futures we are building together. From visions of catastrophe to poetic journeys through the urban, social and artistic imagination, the contributions in this volume redistribute the currents of Boetzkes's ecological and theoretical insights. They discover new terrains of consideration, styles of thinking and creative forms of engaging with art, philosophy and ecological speculation.

A formalized forum for informal inquiry

In Praise of Nonsense

In Praise of Nonsense explores the possibilities and parameters of a postmodern imagination freed from the philosophical responsibilities of fiction, fact, and replication of lived experience. Mobilizing an array of scholars and contemporary artists, this study examines postmodern thinking through the lenses of identity and visual culture. Speculative, critical, and always creative in its approach, In Praise of Nonsense focuses on theories of disappearance, irony, and nonsense, where the pleasures of the imaginary give rise to artistic inspiration. When truth is unhinged, so is falsity, and all artistic thinking is called into question. The book takes on the ambitious project of holding postmodernism accountable for its own conclusions while also considering how those conclusions might still be given philosophical and artistic form.